My name is Simon Dejardin. I’m a BCBA in France, in the Paris suburbs. I supervise an ABA program for adolescents with ASD.

Last November, I welcomed a 14-year-old girl named Cecilia. She has a rare genetic syndrome called Potocki-Lupski. The syndrome includes physical characteristics such as exotropia, low muscle tone, scoliosis, and many others that can cause health complication. The syndrome is also associated with a slew of behavioral symptoms such as repetitive or stereotypical behaviors, wandering, speech delays, physical aggression, and self-mutilation.

When I met Cecilia, I had to make decisions about her curriculum and IEP goals. I decided to work primarily on verbal behavior. Why? First, she was 14 and had very few functional communication skills. Second, a functional assessment indicated her aggressive behaviors were maintained by positive reinforcement (edibles and tangibles) and negative reinforcement (aversive situations).

When she came to us, Cecilia used PECS. But when my staff tried to communicate with her we quickly saw that she exchanged only three pictures, and engaged in frequent response scrolling, and she almost never looked at the pictures! So we decided to try something different.

My next thought was to try to teach her to sign.  We picked three items that she liked: cookies, music, candies. Again, we quickly found ourselves at a dead end – her motor skills and visual tracking of items were too poor.

So we were back to picture exchange, except this time we used large, authentic photographs. Again, we faced the motor and visual tracking issues. I thought to resolve the problem by building Cecilia’s fluency with the Big 6: reach, point, touch, grasp, place, and release. If she could perform the 6 motor movements fluently, all the prerequisites would be present to teach her to exchange pictures with someone else.

⇒    Free-reach: We placed items on a table and measured the frequency of the free-reach preferred items, moving them as soon as she reached them. She didn’t reach the performance standard (or frequency goal) for this movement cycle (MC) but improved her performance by x2 in three weeks.

⇒    Free-point: We implemented forced choice with two items, a preferred one and a neutral item (a sock). We asked her, “What do you want?” and prompted her to point at the preferred item as soon as she started to reach it.

⇒    Free-touch: We worked on the MC by using a clicker. Shaping with a clicker is particularly helpful with frequency building because an auditory “click” is immediate, unintrusive, and when paired with a primary reinforcer, very powerful to teach new skills. We presented a target and clicked each time she touched it.

⇒    Free-grasp/free-place/free-release: I chose to work on the 3 MCs at the same time by teaching Cecilia to grasp a coin from a box, place it above a money box, and release the coin into the money box. We used a clicker to reinforce every successful attempt.

Using Chartlytics, a CentralReach product, was a great bonus compared to traditional graphing. Specifically, interns who didn’t know about Precision Teaching before the intervention were able to make decisions regarding Cecilia’s performance on daily basis. 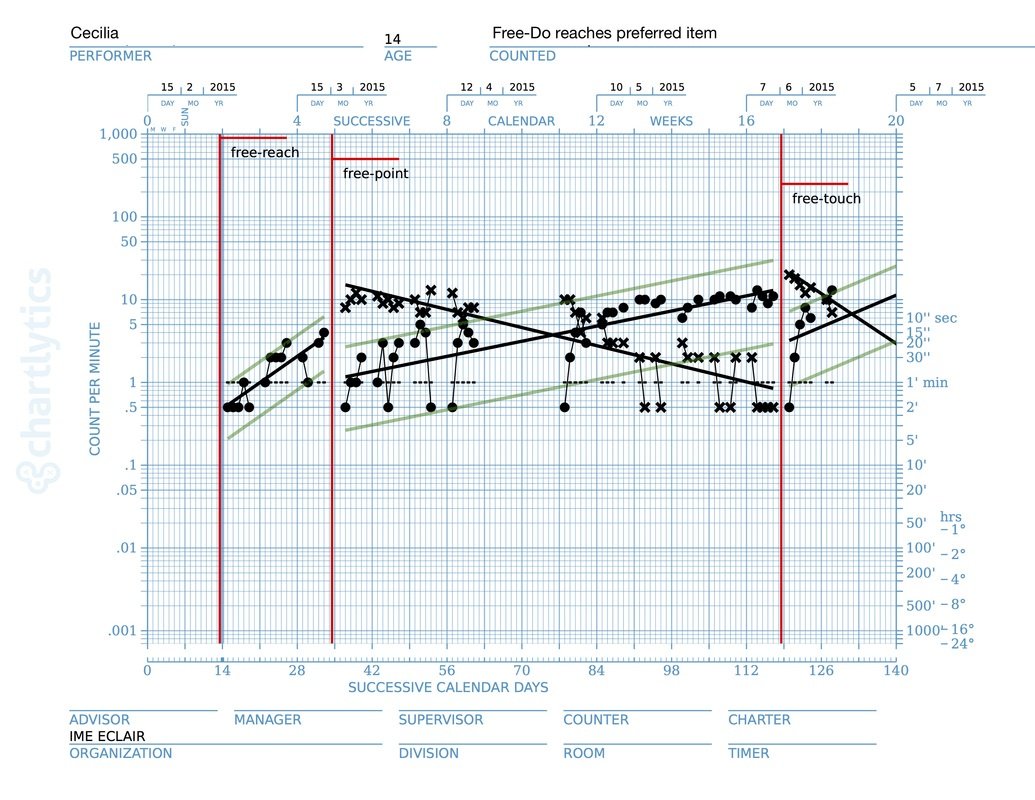 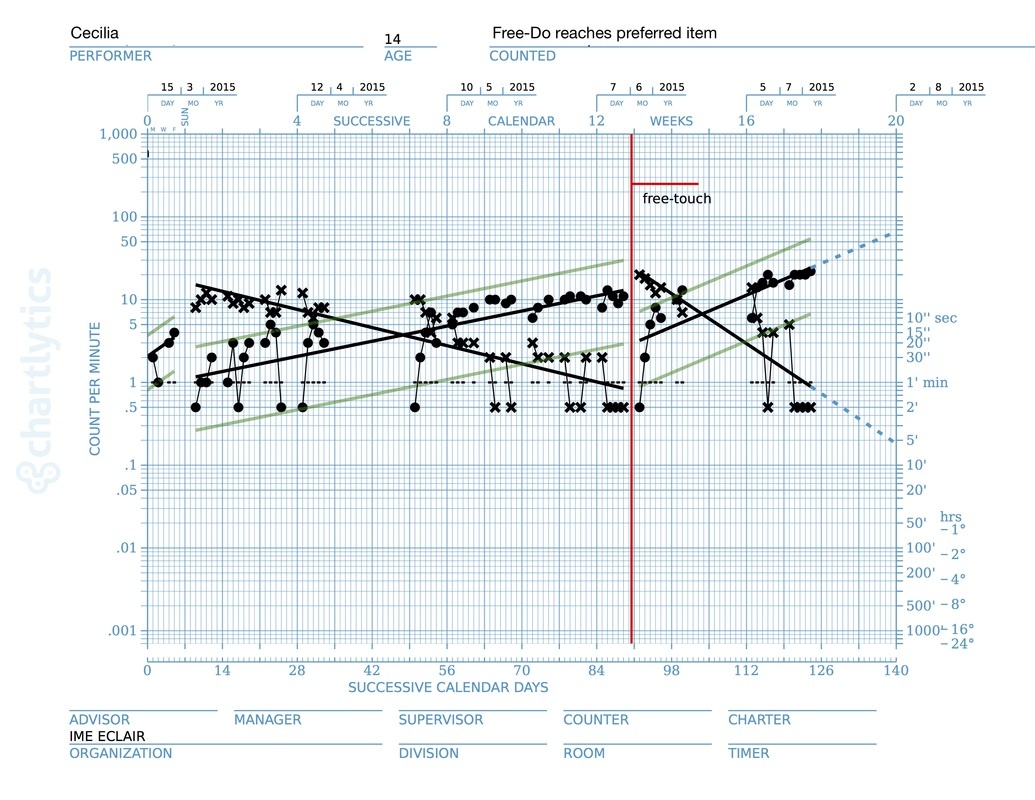 Now we were ready!

With the Big 6 in her repertoire, Cecilia was prepared to reach toward a picture, touch it, grasp it, place it over an adult’s hand and release it.

After the intervention, motor skills and visual tracking were no longer a problem, so we could move toward a more traditional mand training. Each time Cecilia reached an item, we redirected her to the correct picture with a physical prompt. After some time, we successfully faded use of the physical prompt as well as the clicker.

Presently, Cecilia is able to exchange almost twenty small-sized pictures to ask for edibles, tangibles, and removal of aversive stimulations.

The fine motor movement cycles Cecilia developed through practicing the Big 6 appear to have generalized to other situations, giving her access to new activities. Now she can participate with her peers in daily activities such as bringing in the mail and placing cutlery in the dishwasher after a meal. We have seen dramatic improvements in her daily living skills, particularly in dressing: buttoning, zipping, and fastening Velcro.

We would not have achieved these outcomes so quickly without frequency building and use of the Standard Celeration Chart.  Chartlytics made it particularly easy on my staff. After setting up all the inputs, they could use the application for data recording and decision making without supervision or additional training.  My administrators quickly understood the importance of the Chartlytics application and allowed me to sign up the organization for an account.  I thank them for that.

Finally, I thank Cecilia for becoming my Big 6 Hero.